Racing in the suburbs

Fail 19 minutes ago by Squirly

Karl Malone and Dennis Rodman tripping over each other

Clips 2 hours ago by Squirly

I became a proud dad today.

Jokes 2 hours ago by Squirly
He's four but he was a boring little shit for the first three years.

Politics 2 hours ago by Squirly

Say What Now 4 hours ago by Squirly

Technology 4 hours ago by Squirly

Would you believe more than 1% of computers worldwide are still using Windows XP? Incredibly, there are still millions of people using 19-year-old operating system. And a recent development — if it bears out — is another reason  people need to make the switch to something...

18 to 22-year-olds banned from gathering in Boulder, Colorado, after coronavirus surge

News 5 hours ago by Squirly

Nearly 80 percent of recent coronavirus cases in the city were affiliated with students at the University of Colorado-Boulder.

Technology 5 hours ago by Squirly

Jokes 8 hours ago by Squirly
A French breast scientist advises against wearing bras after a thorough study, thus tying for the best job ever and the best news ever.

Kit Kat has released a limited run of new flavors, including Sweet Corn, Espresso, and Kit Cat (with real Cat!).

Obama has budgeted $100million for NASA to lasso an asteroid- $99mill for rope and $1mill for the greatest cowboy hat of all time.

A Russian man attempted to win back his ex-wife with a homemade bomb. Here's an exclusive photo of the couple: ‪http://i.imgur.com/uuJTNmK.jpg ‬

During a shooting, cops recommend going for the gunman, because nothing's scarier than being rushed by someone who just shit them self.

A third live poultry trading market has been shut down in China after six strange bird flu deaths. Personally, I think they're just chicken.

As a living human, you have a .00002% chance of being a billionaire. Jim Carrey reports: http://www.youtube.com/watch?v=zMRrNY0pxfM

Muslims are once again calling for the death of bloggers who blaspheme their religion of peace. "Jesus Christ that's stupid," said Muhammad.

Scientists - "Being launched into a black hole would lead to a fiery death or spaghettification." Everyone else - "Sounds cool as FUCK."

Trayvon Martin's family settled their wrongful death suit for over $1mill. No word on how they'll spend the money, but likely not Skittles.

All based on real news from this week. See more @FridayUpdate on twitter.

The layers of my all handmade croissant

Culinary 9 hours ago by Squirly 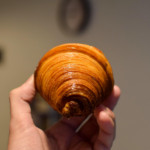